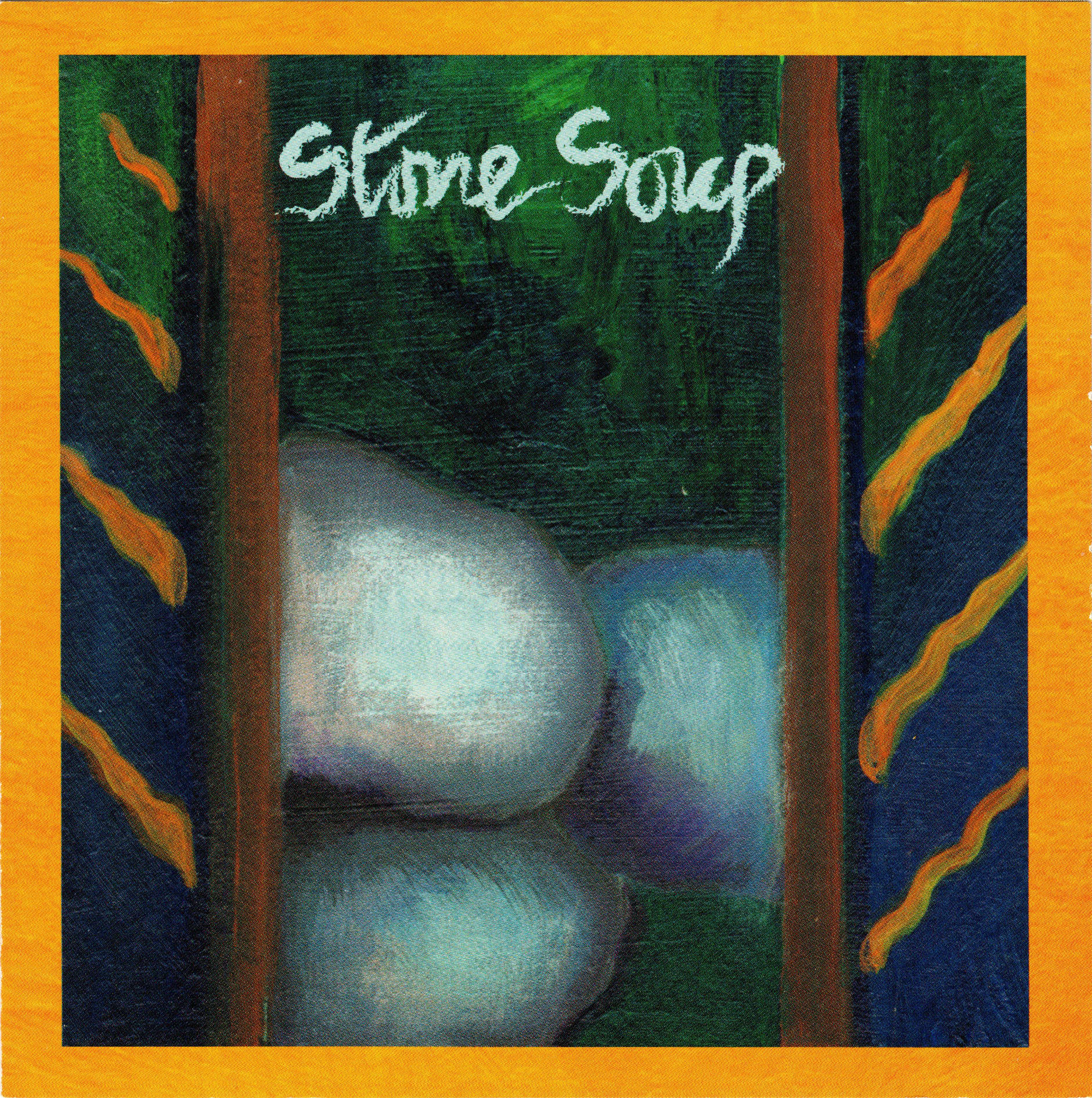 Much of the music on this album is traditional, which means someone came up with it a good long while ago and we don't know who that was, but people liked it so much they kept playing it or asking for it, and it got picked up and passed along in one manner or another until it came to, among others, us.  What a gift...

Deep Monkey (Targee) (3:16) ~ Balinese Flute ~ "This improvisational piece is meant to be a kind of a meditation, a centering experience with a playful aspect, which is important to me because the element of playfulness seems to be so often left out of spiritual practice. I think of the Monkey as my totem animal, with a special connection to that playful attribute, and for me Bali connects with that as well." ~Sonam

Shady Grove (traditional, arranged & adapted by Stone Soup) (4:34) ~ Vocal (Peter), Guitar, Accordion, Wood Spoons, Tambourine, Shekere ~ "This is a pretty well-known American tune. You're probably most likely to run into it in the bluegrass scene these days, although I was sort of shocked and amused and delighted all at once to hear it coming out of my car radio one afternoon in a kind of alternative rock version on a college radio station. The song certainly comes out of the Appalachian tradition--you can hear its clawhammer banjo roots in the modal movement of the melody. There are various lyrics around. I first heard the song on a Doc Watson record, and those are the lyrics we use." ~Peter

Draganovo (traditional, arranged & adapted by Stone Soup) (4:15) ~ Sopranino Recorder, Accordion, Riqs & Tambourine, Bass Drum, Triangle, Janglestick ~ "An Eastern European dance tune in 7/8 time. The odd meter makes the body move in a certain side to side way. I really like the juxtaposition of scales, the minor with the major and sandwiched in. It feels like going around looking into several different rooms in a house." ~Sonam

Olesha's Air (Marris) (2:27) ~ Accordion ~ "The 'Air' is a traditional Celtic instrumental form that is played slowly, with feeling and melodic poignancy, often written in honor of a particular place or person for whom the writer has especially tender feelings--in this case my wife. ~Ed

Candyman (traditional, arranged & adapted by Stone Soup) (3:49)  ~ Vocal (Peter), Guitar, Accordion, Bongos, Tambourine, Brushed Frame Drum, Bass Drum ~  "Another well-known song, this one of African-American folk-blues origin. In one of those fine ironies of 20th century musical culture, I first heard it in the late sixties in a version recorded by someone who had by that time become a British pop star (Donovan, whose early work contains plenty of solid folk interpretations), and our version derives circuitously from that. I love those nifty-pickin' stick-to-the-roots renditions you get with Mississipi John Hurt, Gary Davis, Dave Van Ronk, Taj Mahal, etc., but I'm afraid we have shamelessly abandoned the true line with our go at it."  ~Peter

El Carite (traditional, arranged & adapted by Stone Soup) (3:56) ~ Soprano Recorder, Guitar, High Hat Cymbals, Bass Drum ~  "A lilting South American tune with an openness that seems to be basking in innocence. Our version is good example of how the cross-cultural thing kicks in because of instruments. Taking a melody that was created for the indigenous quena and then playing it instead on a German recorder leads to strange things like putting a rhythm part on cymbals and basically taunting the Ethnic Police to come after you."  ~Sonam

Travailler C'est Trop Dur (traditional, arr. & adapted by Stone Soup) (5:39) ~ Vocal (Ed), Accordion, Guitar, Rub Board, Triangle, Bass Drum ~  "This is a classic old Cajun waltz, with a twist on the trusty lyric of lost love. It turns out that the complaint 'work is too hard, but stealing's no good,' has in fact been provoked by the underlying condition of being unhappy in love. In the end, though, he 'fesses up to what's really bothering him--he's running off 'parce que ma belle m'embete,' (because my girlfriend made an ass of me)."  ~Ed

Chufalingua (Kim-Fredell) (5:17) ~ Marimba, Resophonic Guitar, Rainstick, Madal, Shekere, Indian Cabasa, Janglestick, Nut Rattle ~  "This was written as a way to make use of a wonderful little pentatonic marimba built by a downstate New York artisan. That sweet round spurt of sound you get from bonking on a little slab of hardwood is just delicious. Some African cultures have known this for a long time and I did take a kind of abstract inspiration from that cousin of the marimba, the balaphon. But we're getting pretty trans-continental here. There's stuff from North & South America, Africa, and Asia making noise in this thing.  ~Peter

London City (Kim-Fredell, lyrics traditional) (5:33) ~ Vocal (Peter), Tenor Recorder, Guitar, Accordian, Cornet, Bass, Low Drums ~ "Folk music (I mean literal folk music, not that category the music business sticks singer/songwriters into) is by definition something that has come down to us through an oral (aural?) tradition. But the fact is that, in this day and age, many of us who do this kind of material often inherit songs from the page, so to speak. We turn to the seminal collections of people like Cecil Sharpe, John Jacob Niles, and Carl Sandburg, or to other lesser known collectors who have lovingly bound traditional music into book form. I used to consider this a dirty little secret of mine--that I played folksongs that hadn't been somehow directly passed down to me. Then we played a festival with Spider John Koerner and he said something about how he got songs out of books, and that was my liberation. I figured if it was good enough for him it was certainly good enough for me. At any rate, here was this compelling variant lyric sitting on a collector's page, with no melody to express its mournful narrative. So I worked up some music for it."  ~Peter

Bird in the Tree (traditional) (3:14) ~ Accordion, Spoons, "Bird" ~  "An unusual little reel that I've not often heard played. It always brings to mind our weekend walks in Highland Park, where we incite melodic conversations among the mockingbirds."  ~Ed

Acaj a Pene (traditional, arranged & adapted by Stone Soup) (6:26) ~ Trumpet, Accordion, Dumbeck, Shaker, Tambourine, Bass Drum, Nut Rattle ~  "The slinky side of Eastern Europe, demonstrating a wise use of scale and mode. When I play this tune I find that stressing different notes of the scale brings out different moods. The mode is the mood."  ~Sonam

The John B. Sails (traditional, arranged by Stone Soup) (4:36) ~ Vocals (Peter, with Ed & Sonam backing), Guitar, Accordion, Bass, Shaker, Tambourine, Bass Drum ~  "Under the title "Sloop John B," Brian Wilson turned this Caribbean folk song into an elaborate and justifiably famous pop hit for the Beach Boys in the sixties, replete with the signature harmonies. It's interesting that Dick Dale and the Deltones, the quintessential surf group, recorded the song first. Since some of Dick Dale's surf-guitar classics were covered by the Beach Boys on early albums, it seems likely they were following suit on this occasion too. It would take an anthropologist to sort out all the cross currents of the original surf music scene, but it is certain that they were all entirely under the influence of the encompassing theme of the ocean, so the attraction of this particular song is clear. We have tried to restore some of the island feel, but of course we've gone off in our own direction as well."  ~Peter

From the group's large and inimitably diverse repertoire, twelve strategic selections have been recorded for your journey through a singularly variegated musical landscape. 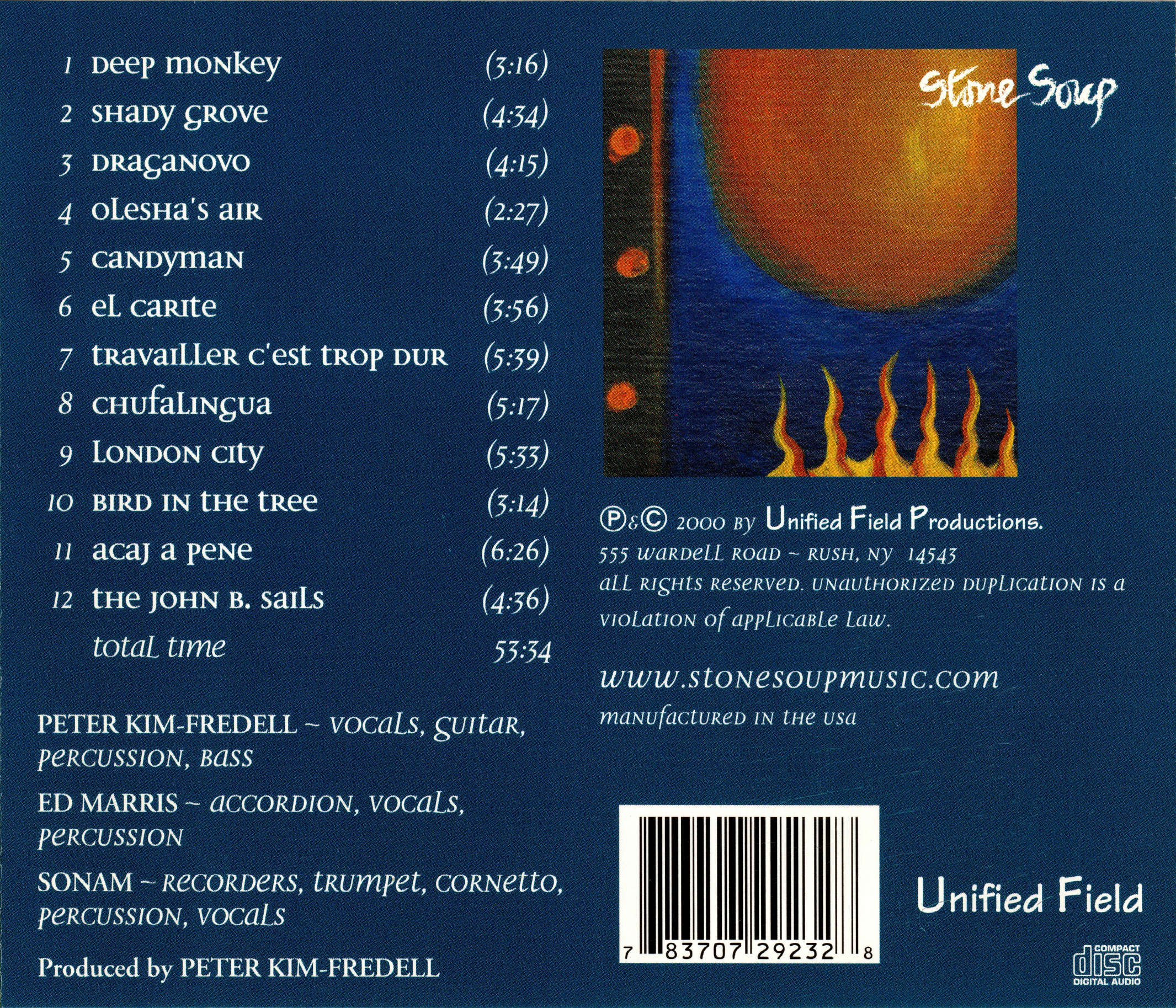 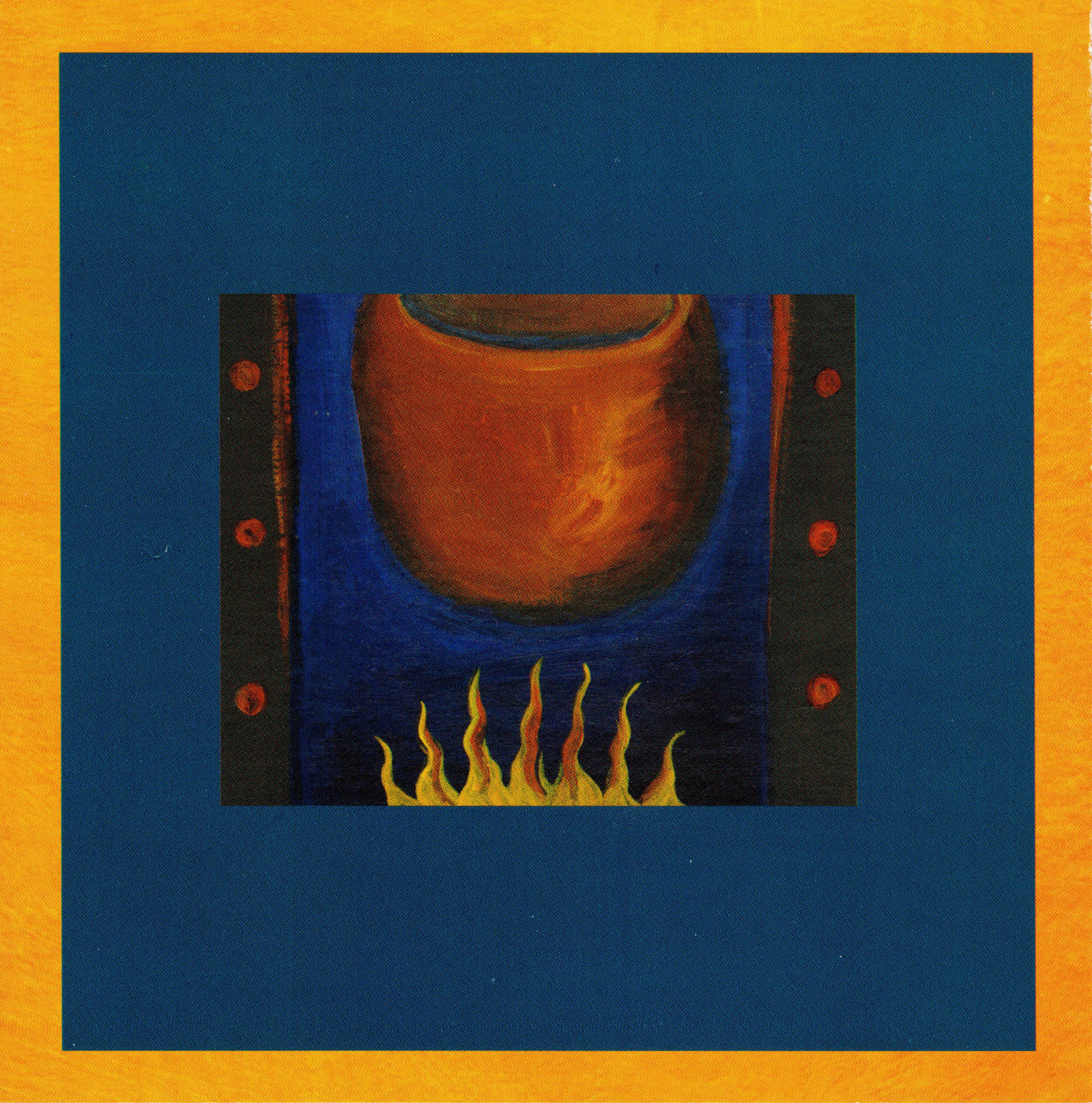 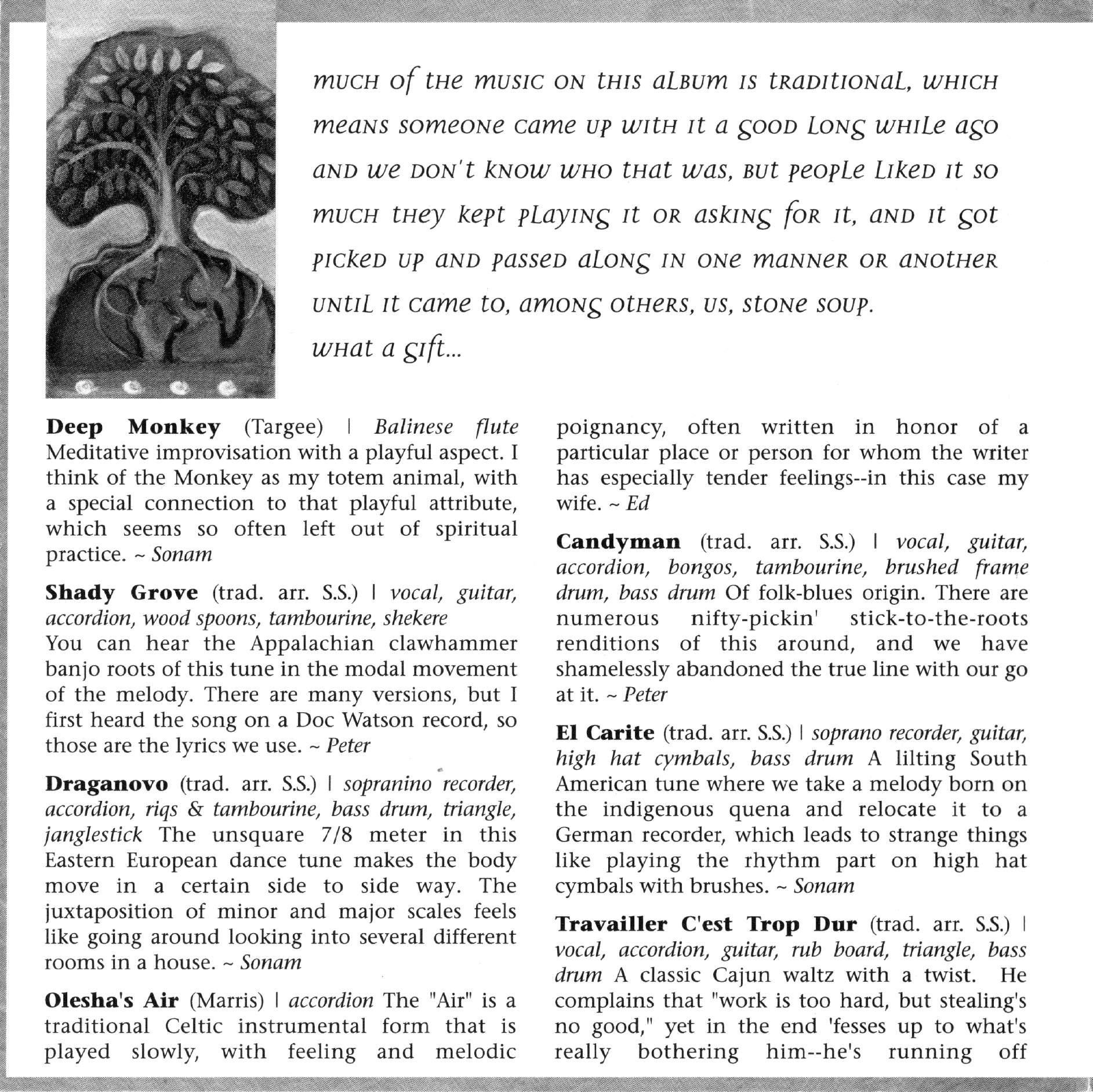 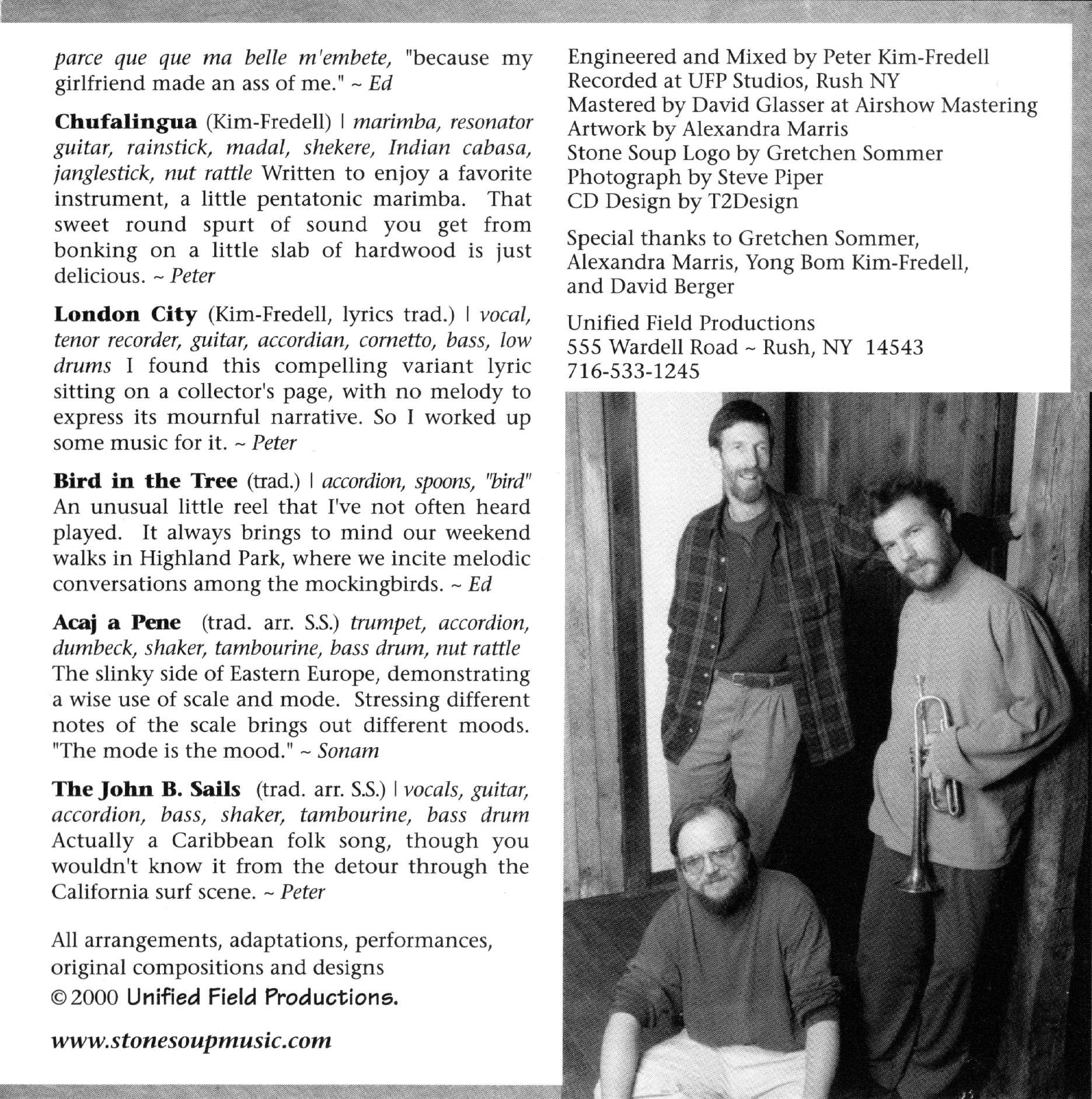 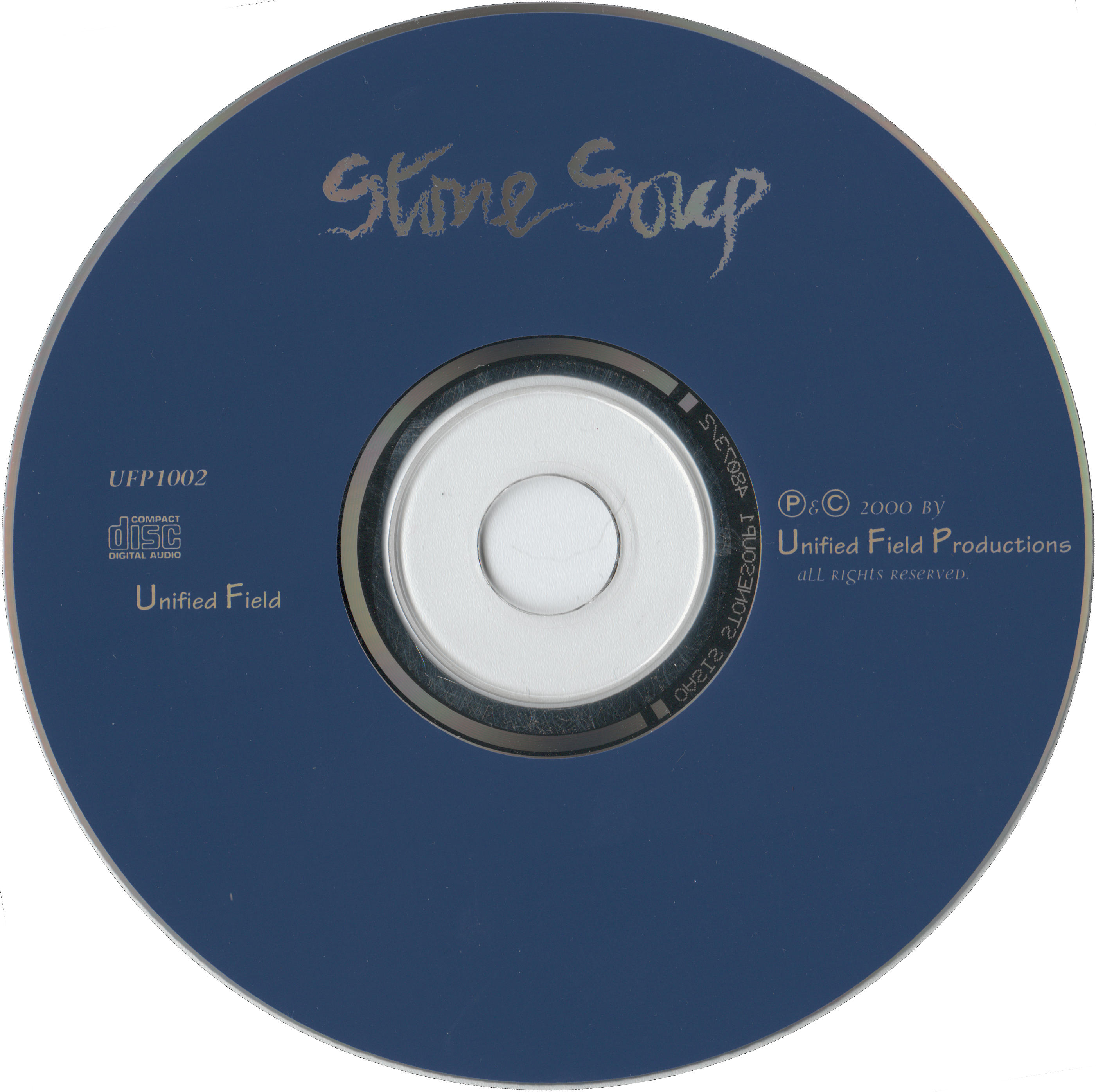