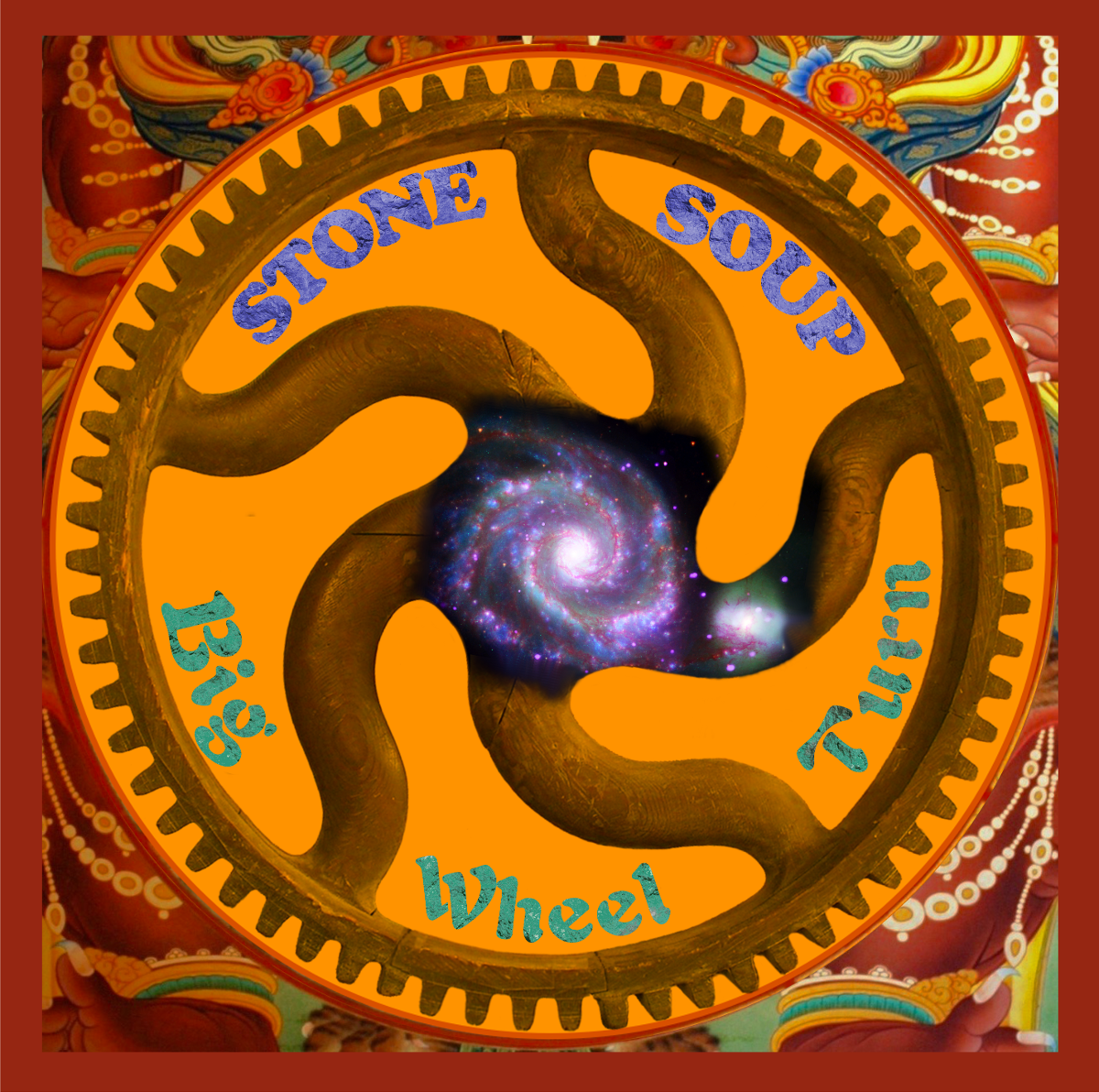 3) Long John 5:01 (Traditional)  This is originally a chain gang work chant, and you can find a grainy posted video clip of the real thing.  It's a pretty powerful thing to see, and talk about traditional...  As a folk song, it was acquired from the great version Dave Van Ronk did, but the arrangement here could be said to have changed almost as much as his did from the chain gang chant.

4) Make Me A Pallet 4:18 (Traditional)  A pretty well-known tune, probably likely to be run across in a bluegrass setting.  This particular version was originally come by via Doc Watson, but it bears mention that there's a fine old slow Chicago blues piano & vocal iteration on record, the existence of which demonstrates the kind of stylistic and cultural crossover that was natural in earlier days.

5) Gambler's Blues 4:57 (Lyrics, Traditional - Music, P. Kim-Fredell) Wide Net Publishing  Another found traditional lyric that needed music to be made for it.  This lyric is considered to be a variant of St. James Infirmary, which has been enduringly popular following the Louis Armstrong rendition recorded in 1928.   But this is a different song here, though the opening line echoes the other. 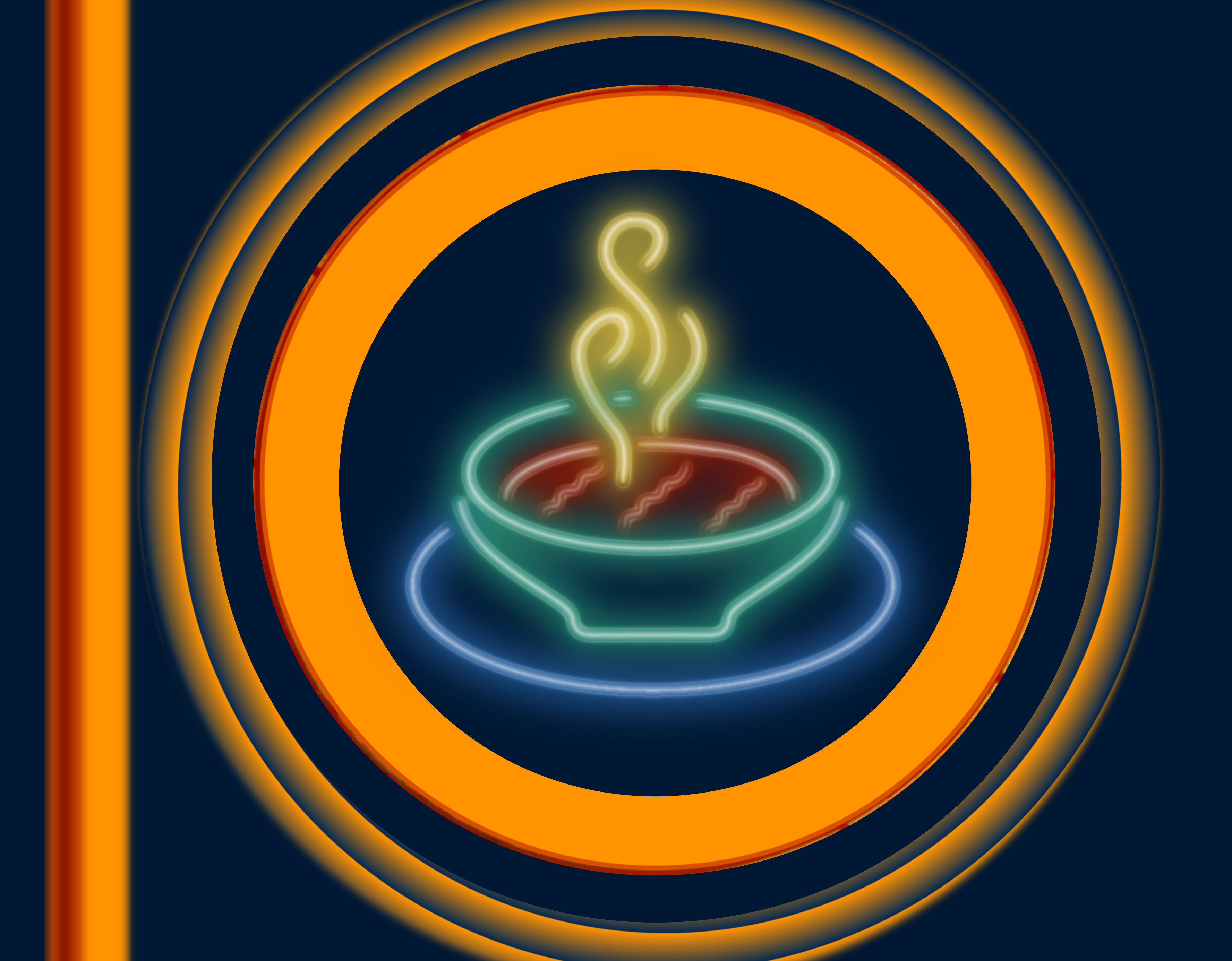 9) The Woman at the Well 5:04 (Traditional)  If you're especially lucky, you might have in your possession the very first album of one of the greatest singers of the last 50-odd years our time, Tracy Nelson, recorded at the age of 20 in 1964 and released the following year on Prestige as Deep Are The Roots.  This song is on that remarkable album, titled King Jesus Met The Woman At The Well (which was just too long to meet the space demands of the CD artwork design...but traditional music always includes a license to adapt.)

10) Hang Me, O Hang Me 4:50 (Traditional)  Been in the repertoire for decades, and was recorded for this album before the release of the Coen Brothers film Inside Llewyn Davis, where it was a featured tune (nicely done) which inspired further recorded interpretations.  Oh well, so finally this arrangement comes out...  Got it from Dave Van Ronk, just like them, but long ago.

11) Maybellene 4:01 (Chuck Berry) Isalee Music Company  An iconic ripper from a founding father of rock 'n roll, and perhaps a tall order on an album of traditional tunes and folk age favorites?  But a bit of rock vibe has already made its appearance, surely, along with some Americana feel (and hasn't that original RnR zeitgeist found a good home among the hot country twangers?) and why not take that famously hyper-uptempo tune and turn it into a more of truckin' blues thing?  Why not?

1) Sugarbabe 3:54 (Traditional)  First heard on an early Tom Rush record.  Played an arrangement different from the one here for many years and it was fine except it called for capoing high on the neck which made tuning an eternal hassle.  The song is done in the key of D so moving to a capo-free zone suggested dropping both E strings to D, and that worked.

2) John Henry 4:42 (Lyrics, Traditional - Music, P. Kim-Fredell)  Wide Net Publishing  Another one that was played in a different arrangement for many years.  A widely known tune, the lyrics here were adapted from a collected version and there may be some appreciation of the fact that only half of them were used.  (The music was put together long enough ago so that I had forgotten I did it myself at the time the album credits went to the printer. ~pkf) 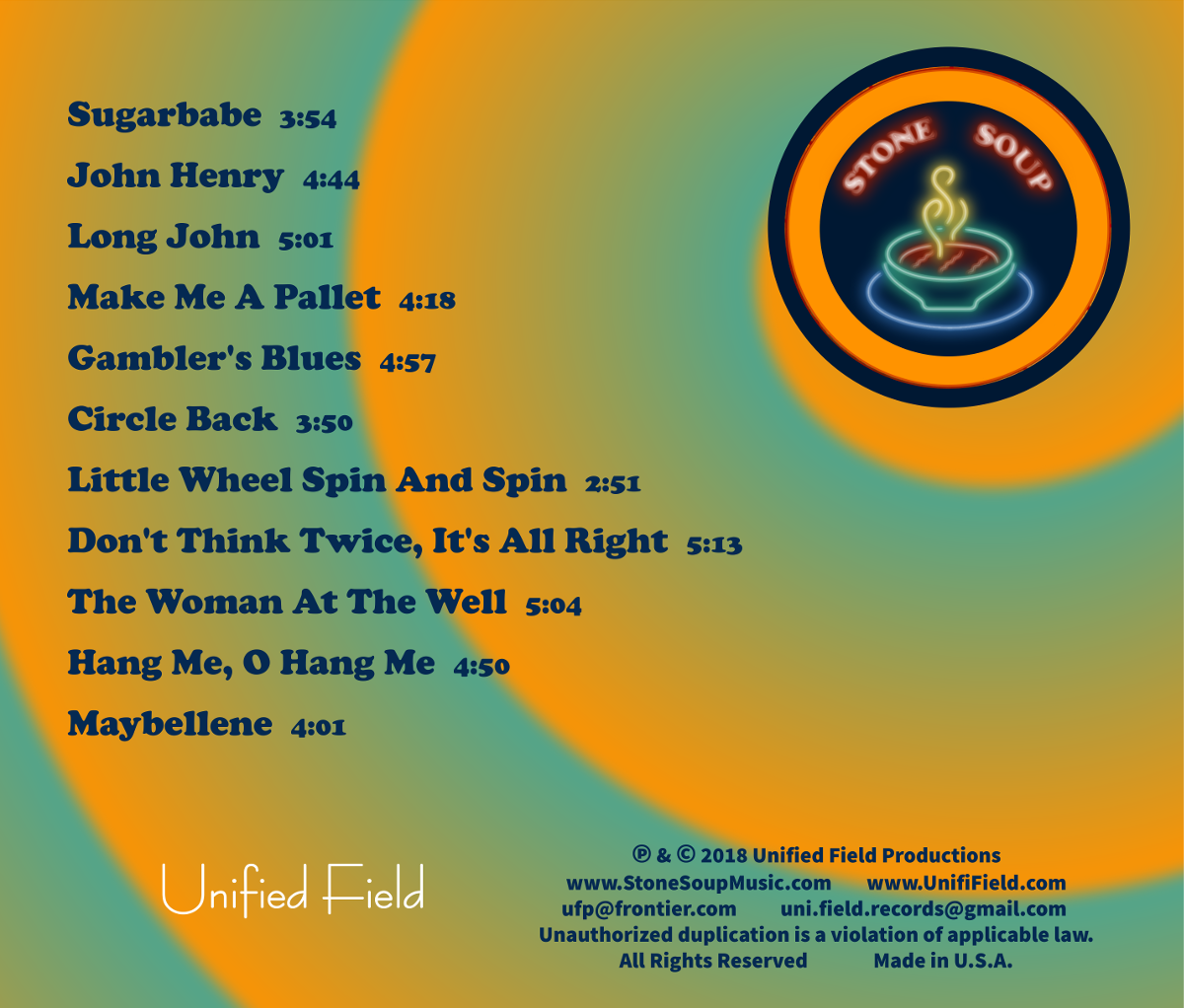 6) Circle Back 3:50 (P. Kim-Fredell) Wide Net Publishing  Sometimes you just have to slip in something really different.  The world-music side of Stone Soup's middle period nurtured a taste for percussive rhythmic jam-style delights that is hard to leave entirely ungratified.

7) Little Wheel Spin And Spin 2:51
(Buffy Sainte-Marie) Kobalt Music Pub America  |  Obo Gypsy Boy Music Inc  No one can touch Buffy Sainte-Marie's electrifying own rendition.  Still, such a strongly written song more than deserves to be taken up by others, even if necessarily in a very different way.

8) Don't Think Twice, It's All Right 5:13  (Bob Dylan) Special Rider Music  Ramblin' Jack Elliot's late sixties interpretation of this folkie classic was the inspiration for taking up the tune, way back when.  Of course, you've really got to try to bring something new if you're going to put it on a record, yet again... 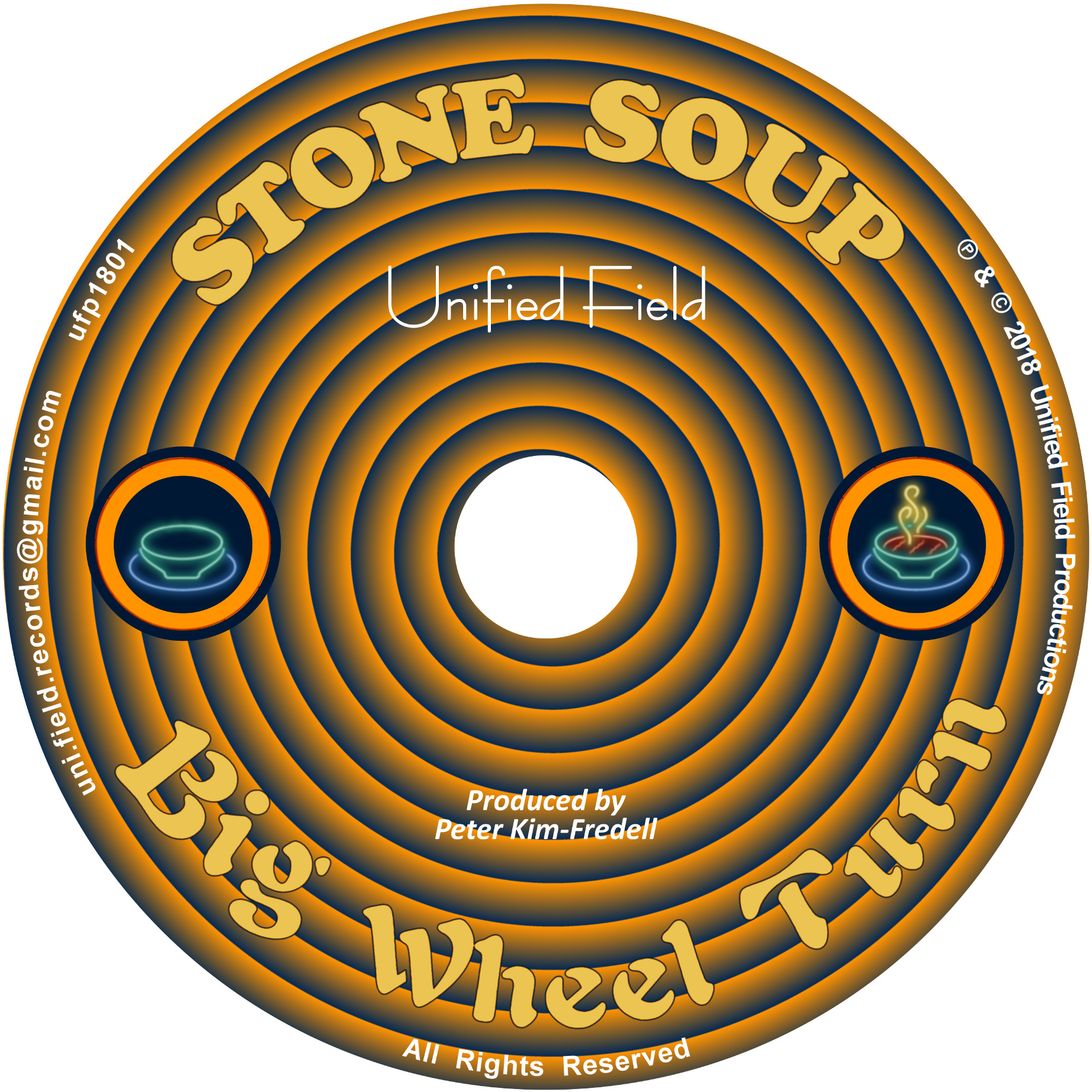 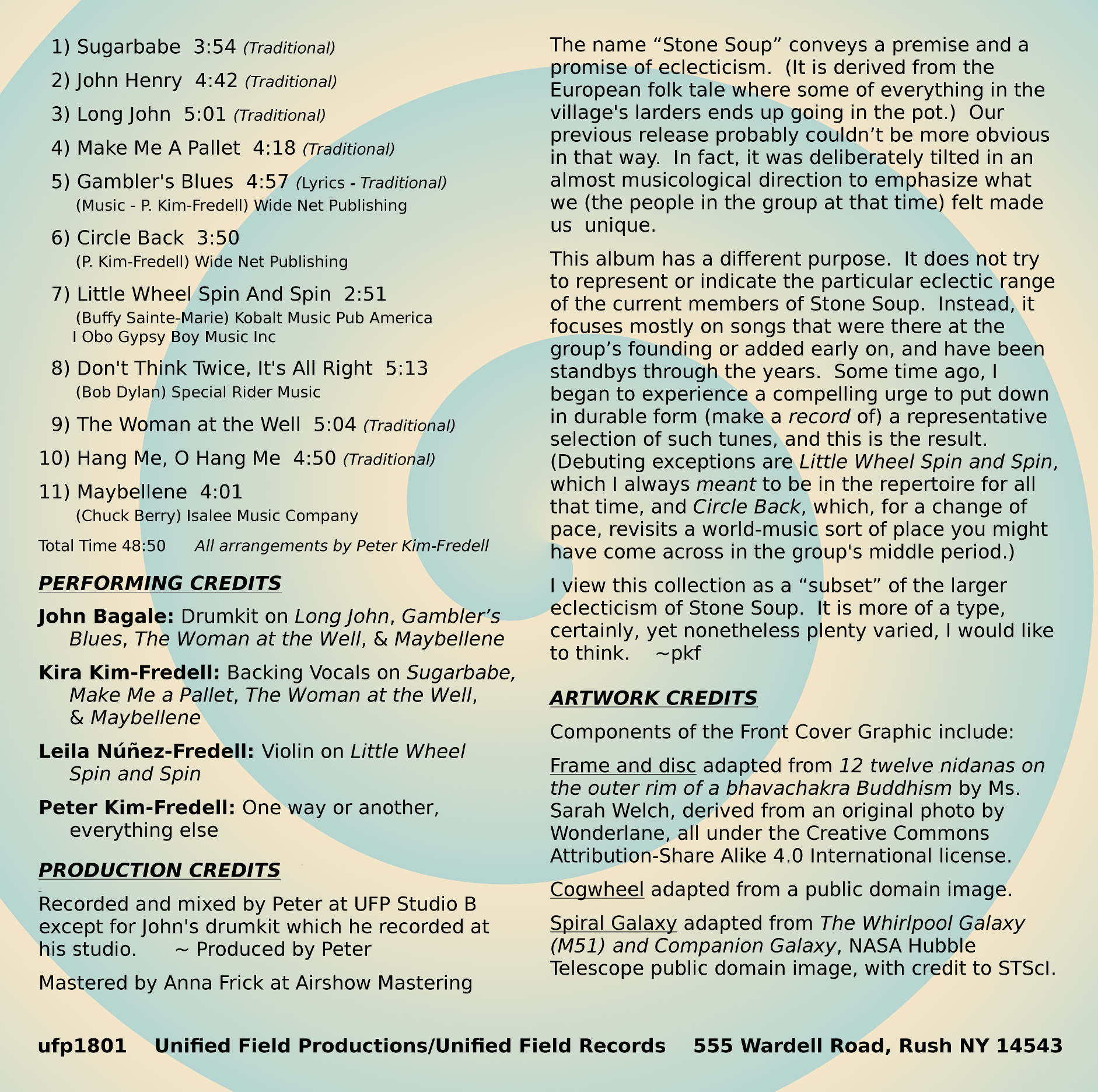